If all children accepted the food parents gave them, feeding kids would be easy. In fact, this is usually what happens the first 18 months to 2 years of a child’s life.  But then one day the same child who ate almost everything starts to say “no” and rejects foods. In the eyes of a child, new foods can be scary and intimidating. And parents are left unsure what to do, afraid their little one will become deficient in key nutrients.

There are times when kids may require professional help if they are to become normal eaters. 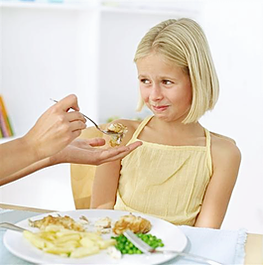 Selective eating disorder (Avoidant Restrictive Food Intake Disorder or ARFID)
Selective eating is picky eating that persists into middle childhood and beyond with an extreme reluctance to try new foods. Unlike eating disorders, there are no body shape issues and weight of the child can vary, with many children being underweight.

It is often not diagnosed as a clinical problem because

– their weight tends to fall in the realm of normal

– medical and laboratory tests do not indicate any abnormalities

– medical doctors tend not to consider these conditions to be problematic for the patientor to consider this category of eating dysfunction pathological.

Compounding these problems, picky eaters tend not to recognise their condition as ‘dysfunctional’, nor do they recognise that help is available to them.  However, the longer parents wait to get help, the harder it is to treat.

Now this doesn’t mean that any 10-year old picky eater has selective eating. These kids only accept a very narrow range of (usually white) food. The typical list includes pasta, macaroni and cheese and gold fish and some will drink milk.

Selective eaters tend to only eat their accepted foods at home even if someone else is making it the exact same way. When they try a new food it’s common for them to choke, gag or even vomit which leads to their anxiety about eating. This is neurological because the part of their brain that recognizes food as pleasure is underdeveloped.

Typically by age 6 kids really start expanding their palate but with selective eating this doesn’t happen, making social activities anxiety-ridden for the child. They often fall off the growth charts and can experience slow bone growth if left untreated.

Who gets it?
Children with a family history of autism, eating disorders, OCD and severe picky eating are at greater risk for developing selective eating. With autism spectrum disorders (ASD) on the rise, selective eating is becoming more common.

A recent study published in the Journal of Pediatrics, showed that while both ASD and non ASD children had picky eating, the ASD group refused more foods and had a smaller repertoire of foods they would eat. As a result, these children had insufficient intakes of vitamins A, C, D, zinc and calcium.

This doesn’t mean non ASD children can’t become selective eaters, but it appears to be more common in children with ASD.

What worried parents should do
Parents know their kids best, so if they sense something is wrong, they should seek professional help.

Start with the pediatrician and if they can’t refer you to anyone, find a dietitian that works with eating disorders. Even if the pediatrician says your child’s eating behavior is not worrisome, it’s worth it to get them evaluated.

The sooner kids get treated for selective eating, the better off they’ll be. And if left untreated, kids who are selective eaters will grow into adults who can only eat a short list of foods. This not only negatively impacts health but hampers social activities where food is often the central part of gatherings.

So when in doubt, get your child evaluated.